Willow Grove Cemetery, located in New Brunswick, NJ on Morris Ave, is quite beautiful and also very sad. The history is abundant, unfortunately the broken/missing gravestones, stolen plaques, and graffiti, makes this site a little disturbing for graveyard lovers like us. Graveyards represent, not only religious monuments to the dead, but also a great deal of history. Care should be taken while visiting any cemetery and treated with respect. This is where the old saying "Take nothing but photographs, leave nothing but footprints" comes into play.

We found no sign to tell us the name or history of the cemetery, but through volunteering for findagrave.com, we found it rather quickly (it helped that we pass it quite often). We learned that it is a cluster of  three burial grounds. The oldest portion, closest to George Street, was established in 1837 when the Presbyterian Cemetery was moved from Burnett Street. Willow Grove was established in 1851 and is  the portion of the cemetery closest to Livingston Avenue. The land between the two was opened as the Cheesman Cemetery sometime in 1868.

Police Officer William Van Arsdale was 49 years old when he  drowned after falling into an ice-covered canal while making his rounds of the docks and coal yards on a freezing December 7th,

It is believed that he was attempting to move around a fence when he fell through the ice at approximately 2:00 am. The next day after a worker noticed a hole in the ice and a hat frozen into the ice nearby his body was located.

Officer William Van Arsdale was survived by his wife and six children. 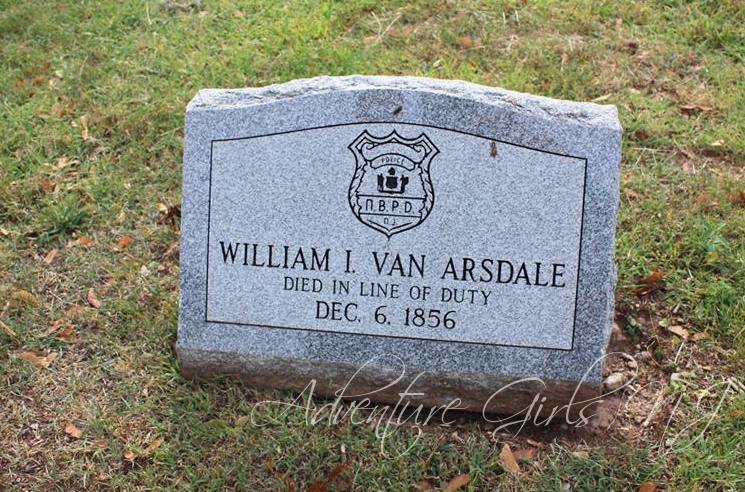